Congratulations to our 2022 Environmental Policy and Planning (EPP) and Smart and Sustainable Cities (SSC) graduates. The images below were taken before, during, and after the CAUS graduation ceremony.

From 5:00 to 7:45pm on May 7, 16 teams of students (in SPIA/GEOG 2244 Sustainable Urbanization) will be presenting their projects that envision the VT Innovation Campus. The presentations will be held in room 220 in the New Classroom Building and will consist of a poster, handout, and a live demonstration of how they have analyzed their ideas using UrbanFootprint.

Last fall, Virginia Tech announced its plan to build a 1,000,000 square-foot Innovation Campus in Alexandria as part of a larger pitch to bring Amazon’s HQ2 to Northern Virginia. After hearing this news, I started thinking about how this development could be explored in my Spring semester Sustainable Urbanization course.

Around the same time, I was also introduced to UrbanFootprint – a big data urban analytics platform – as an interesting tool for teaching urban sustainability. Combining these two opportunities resulted in a proposal to use UrbanFootprint to study the new Amazon HQ2 and VT Innovation Campus. However, I faced to two challenges with this idea. The first was securing the financial resources to cover the UrbanFootprint license for up to 90 students. The second was finding an appropriate way for the class to engage with the VT Innovation Campus team to make sure that (1) students had access to relevant information and (2) their final products would be of value to the team.

After exploring a couple of funding opportunities, the first challenge was solved when the Urban Affairs and Planning Program (UAP) and the School of Public and International Affairs (SPIA) kindly agreed to share the cost of a one semester license. In addition, UrbanFootprint agreed to allow over 80 students in the class to use the platform in teams, rather than as individual users, which had not been done on this scale before.

The second challenge was addressed by working closely with Dr Kristie Caddick, the project manager for the VT Innovation Campus. As one might expect, building a 1,000,000 square-foot campus is a formidable challenge and managing such an endeavor requires a dedicated team that was forming at the time I was exploring this idea. Fortunately, the team saw the pedagogical value of challenging our undergraduates to learn more about the project and explore visions of how the campus could be developed.

As with all new ideas, it’s never as easy as you hope. While the funding for the UrbanFootprint license had been secured, it took a patient team of professionals at VT and UrbanFootprint to develop a workable license agreement that was signed the day before classes begun. This delay meant the teaching team were co-learning the platform with the students, which was a little uncomfortable at first, but resulted in a learning environment that was ‘real’ and collaborative.

By the time we reached Spring break, the teaching team had a sufficient handle on the platform that we moved from knowledge/skill-based exercises to a more complex task – to start exploring how the VT Innovation Campus could be built in Alexandria. This task was co-designed with Dr. Caddick, who introduced the students to the history of the VT Innovation Campus and more recent developments via a guest lecture.

In parallel with their work in UrbanFootprint, students have been searching for best practices of sustainable urbanization in the US and overseas that are now informing their ideas for the VT Innovation Campus. Last week, each of the 16 teams crafted a vision statement for the new campus. Several of the draft statements are shown in the slideshow below, along with a few pictures from several guest lecturers who have joined us this semester.

On May 7, from 5:00 – 7:00pm, in room 220 of the New Classroom Building at Virginia Tech, 16 teams of students will present their visions for how the VT Innovation Campus could be developed. The presentations will consist of a poster that outlines their vision and development strategies and a live demonstration of how they analyzed the potential impacts of their vision using UrbanFootprint.

In one week we will welcome our first cohort of students into the new Smart and Sustainable Cities (SSC) and Environmental Policy and Planning (EPP) majors. Over the past two years, faculty in the School of Public and International Affairs (SPIA) have worked to completely revise the Bachelors of Arts in Public and Urban Affairs (PUA) that is now the home of these two majors. The PUA degree will provide students with a solid foundation in U.S. government and politics, the legal foundations of planning, collaborative policy-making and planning processes, urban public issues, transdisciplinary problem solving, and public service leadership. It has been carefully designed to ensure student learning outcomes are introduced, reinforced, and assessed throughout the curriculum, which provides significant opportunities to integrate signature projects/problems within the curriculum.

The SSC major consists of two unique tracks in urban analytics and urban sustainability, an integrative course on data and the art of decision-making, and a capstone studio. The PUA degree core and SSC major creates one of the first undergraduate degrees in the nation to integrate governance and planning processes, urban analytics, and urban sustainability. See the video below for a little more information on the new SSC major.

Students at Virginia Tech will be able to major or minor in SSC and EPP, or complete a double major in SSC and EPP. Students will also be able to take advantage of other majors and minors at Virginia Tech to develop their own unique combination of knowledge and skills. To support their decision-making, we have enhanced our undergraduate advising capacity to ensure that each student receives the help they need when selecting majors, minors, courses, and potential career pathways. 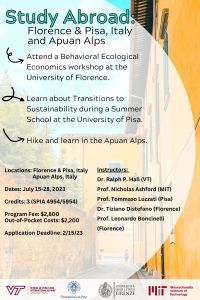